Wood technology 1Cf. Chapter 1, ‘Research methods’, note 1.
Study of the woods that painters have used as supports may be approached in a number of ways. It can be based on technology, for instance, comparing the qualities of different woods and their performance over time: some woods remain flat, even with limited thickness, while others warp, crack, and require complex assembly. Durability – resistance to destructive agents (woodworm, furniture beetles, mould, etc.), is another factor that may be considered.
The sole focus here is on research into the origin of the wood and how the supports were constructed. We will therefore present, very briefly, some general ideas on the formation and structure of wood, leaving aside its physical properties, which do not fall within the scope of this study. 2Klein 2012: 51–65.
Formation of the wood
All our forest trees belong to one of two clearly defined groups:
•Conifers (fir, pine, larch, etc.)
•Broadleaf (oak, beech, chestnut, etc.)
Examining the cross- section of a tree at a given level, we can make out annual growth rings, 3Only trees growing in the temperate zones, not for tropical trees. the number of which measures the age at this level (Fig. 34).

Figure 34 Cross-section of a tree. Right: magnified detail showing the position of the growth ring.
Between the bark, located on the outside, and the wood proper, there is a layer of cells forming a sleeve around the wood, the vascular cambium, which generates the wood cells. 4The wood cells (xylem) and also the outside bark cells (phloem). The cells of the cambium have thin walls and tear easily in the spring and summer. The tissues formed in this way as of each spring are soft and constitute the early wood or spring wood.
The tissues formed during the summer are more dense and resistant. They constitute what is known as late wood or summer wood (Fig. 34). The vascular cambium ceases to function with the onset of autumn and winter, and the tree stops growing. Growth then resumes the following year in the same way, with the result that two types of wood with very different physical characteristics are produced in each annual growth ring. This division into two layers within the growth ring is not always very precise.
Conifers
The early wood and late wood in each growth ring are clearly differentiated and easily distinguished, the latter being darker in colour than the former. 5Klein 1990: 38–40.
Broadleaf varieties
The two zones are clearly distinguishable with the naked eye in some cases: the early wood displays small perforations or pores, which form a porous zone, whereas the late wood also has pores, but these are smaller and not visible to the eye. Woods of this type are referred to as ring porous (oak, chestnut, elm, ash, etc.). In other, diffuse porous woods (beech, birch trees, box, etc.), all the annual growth appears as a single layer.
We also notice when examining the cross-section of a trunk that in certain species, the central part has a more pronounced colour than the outer part. The latter is called sapwood and the central part heartwood or duramen. This change of colour is related to a physiological change that occurs at a certain age.
Some species, such as oak, chestnut, pine, and larch, have clearly distinct sapwood and heartwood. Other species do not display any colour difference between the central and outer areas: there is no clearly distinct heartwood (e.g. fir, spruce and some species of poplar).
Anatomical structure
Wood consists of a collection of cells that perform both a mechanical, support function within the tree and a physiological function (conducting the substances the tree needs to live and forming reserves of some of them). These elongated cells are generally oriented along the axis of the tree. The different types of cell are grouped into:
•Support tissues: fibres
•Conductive tissues: vessels and tracheids
•Storage tissues: parenchyma
The latter group includes some slightly specialised cells that form wood rays or medullary rays radiating out from the centre, perpendicular to the axis of the tree. These can be seen in a cross-section of a tree, where they form narrow ribbons, visible to the naked eye. These rays are not visible in conifers (Fig. 33), but can sometimes be made out in hardwoods – oaks in particular (Fig. 32). The much-prized figure 6In wood, figure refers to the appearance of wood, as seen on a longitudinal surface (side-grain): a ‘figured wood’ is not plain. The medullary rays often produce beautiful figure. shown by certain wood types is attributable to these rays. shown by certain wood types is attributable to these rays.
The different tissues making up the wood are arranged in varying ways, but the wood of a particular species always comprises the same types of tissue, grouped in the same manner. This is expressed by stating that the anatomy of the wood is constant for a given species, regardless of where it grew. Knowledge of wood anatomy therefore allows a species to be securely identified, either by the naked eye or with a microscope. 7Cf. Chapter 1, ‘Research methods’, note 1.
The wood anatomy is examined in three cutting directions: transverse (or axial), radial (or quarter-cut) and tangential (or plain-cut) (Fig. 35). 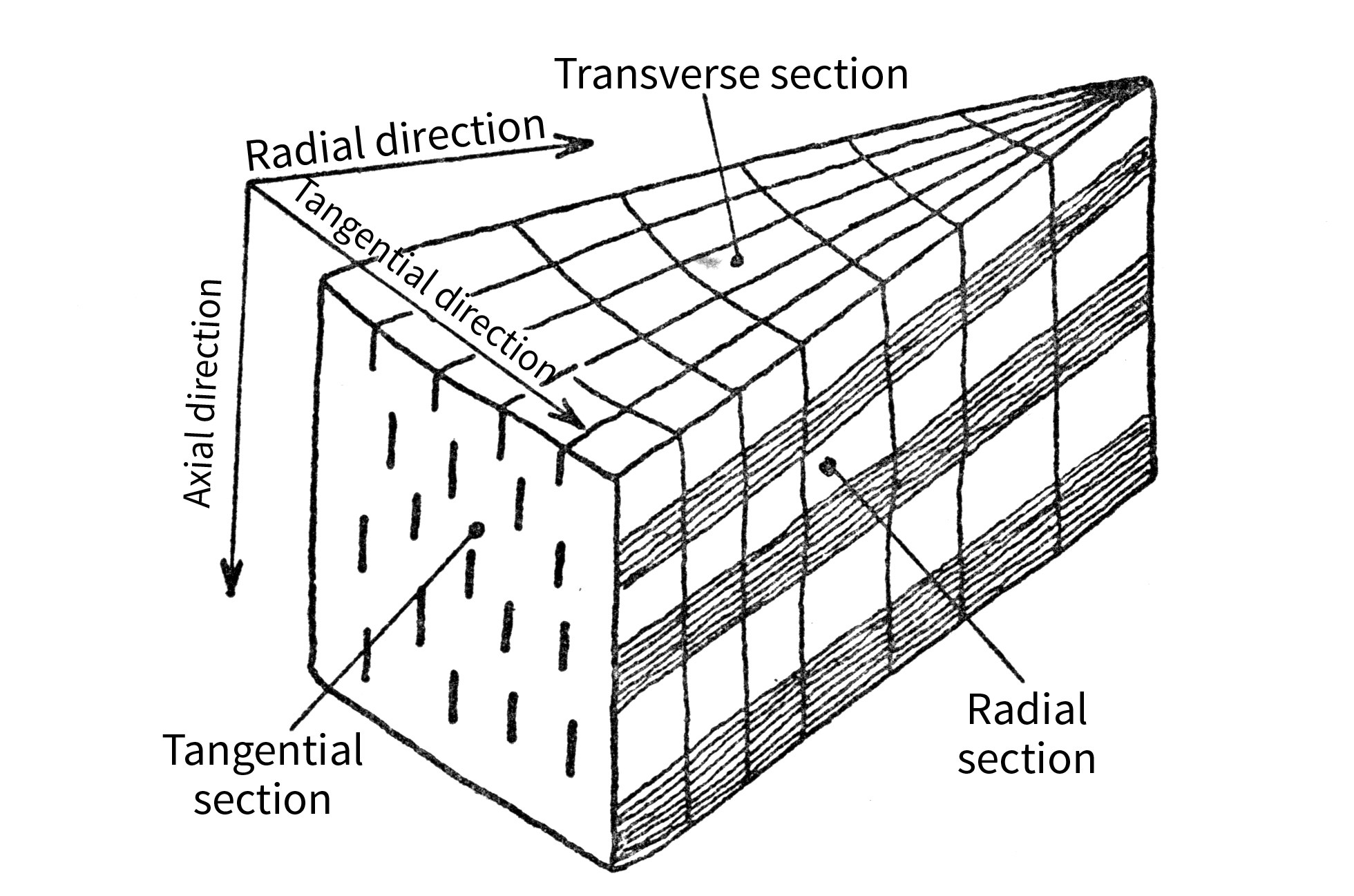 Figure 37 Diagrams showing the different elements of (a) a softwood and (b) a hardwood in the transverse, radial and tangential sections.
Hardwoods
Hardwood anatomy is highly complex and incorporates a variety of elements (Fig.37b):
•The fibres, which provide rigidity and have a spindle shape similar to that of tracheids, do not have bordered pits and are generally two or three times shorter than tracheids.
•The vessels, which are frequently visible to the naked eye, particularly in ring porous hardwoods, and which comprise the wood’s pores.
•The parenchyma cells, scattered or grouped into ranges.
•Lastly, the medullary rays, which are more complex than in the softwoods. In some cases, they are very fine (poplar, chestnut), while in others they are visible to the naked eye (oak, beech).
Variation in structure
While a given species has a constant wood anatomy, this can nevertheless present significant differences – depending on the samples – in both physical (density, shrinkage) and mechanical terms. The relative quantities of the different tissues forming the wood do, indeed, vary, and this is visible in any sample, taking into account the width of its annual rings, which indicates the rate at which the tree has grown. This rate depends on numerous factors (climate, soil type, forest management, etc.) and results in varying proportions of early wood and late wood within a growth ring. The situation is generally different, depending on whether one is examining a softwood or a (ring porous) hardwood.
Taking a coniferous tree as an example, we note that generally speaking the larger the growth rings, the greater the predominance of early wood over late wood. Consequently, a softwood with wide growth rings will not be very dense. On the other hand, since spring wood is less prone to shrinkage than summer wood, it will also be less susceptible overall to shrinkage. If, by contrast, a softwood has narrow growth rings, it will be relatively more dense, with a higher degree of shrinkage.
Turning now to so-called ‘heterogeneous’ hardwoods (such as oak), we find the opposite of what we have just stated for softwoods: namely that the wider the growth rings, the denser the wood and the greater the shrinkage.
Flaws in the wood8For the purposes of this study, we will deal only with flaws in the wood, rather than with alterations, decay or rot, or insect damage.
As we have just seen, despite the consistent anatomy of the wood for a given species, different samples of the same type of wood can display very different structures and mechanical and physical characteristics, even assuming that the wood in question is considered to be normal. A further complication arises from the fact that in practice wood often contains flaws – anomalies in its structure. These consist of irregularities or peculiarities in the way the cells are laid out in the anatomy of the wood, or of discontinuities in the normal sequence of tissues, which has the effect of compromising the wood’s cohesion. The principal flaws are knots, growth defects, and cracks. 9Campredon 1949: 28, 29; Murray et al. 1996: 145–2; Hoadley 1998.
Knots result from branch growth: they are the traces of a branch enveloped by the tissue of the trunk as the tree grew in diameter. 10Campredon 1949: 29. They include live knots and dead knots: the fewer the knots, the more desirable the wood. Growth defects are irregularities formed by abnormal tree growth. The most frequent and most important are: twisted grain, 11Banks and Hale 1996: 3–7. curvature of the trunk, hard streak or red-wood, cross-grain, cracks, ring shake, and frost cracks. 12For further details of each of these defects, see Campredon 1949: 29–32.
1     Cf. Chapter 1, ‘Research methods’, note 1. »
2     Klein 2012: 51–65. »
3     Only trees growing in the temperate zones, not for tropical trees. »
4     The wood cells (xylem) and also the outside bark cells (phloem). »
5     Klein 1990: 38–40. »
6     In wood, figure refers to the appearance of wood, as seen on a longitudinal surface (side-grain): a ‘figured wood’ is not plain. The medullary rays often produce beautiful figure. shown by certain wood types is attributable to these rays. »
7     Cf. Chapter 1, ‘Research methods’, note 1. »
8     For the purposes of this study, we will deal only with flaws in the wood, rather than with alterations, decay or rot, or insect damage. »
9     Campredon 1949: 28, 29; Murray et al. 1996: 145–2; Hoadley 1998. »
10     Campredon 1949: 29. »
11     Banks and Hale 1996: 3–7. »
12     For further details of each of these defects, see Campredon 1949: 29–32. »